NO MATTER HOW UPSETTING,
I can’t seem to make anything better

▪️PARANOID anger
Paranoia can be identified on a continuum, FROM mild & occasional (“I bet she’s talking abut me”) TO severe & continual (“I know they’re watching me thru the tv”).
In the present, it’s the Paranoid’s irrational assumption that they’re somehow always in danger, but can’t quite put their finger on it, or prove it.
They are absolutely sure that others are out to get them, take what’s theirs, want to humiliate them socially, or attack them in some other way.

Paranoia comes from the experience of being in very real & continual danger growing up. As children they were double-binded, manipulated & controlled to the point of never being able to trust their own thoughts & emotions, much less anyone else’s.

As a result they’re always on guard, never relaxed. Their ability to process & evaluate correctly is flawed or non-existent, confusing their own motives & emotions with those of others. The fear/terror is a deep sense of insecurity & powerlessness, which generates a lot of anger.
Instead of admitting the rage, they project it out onto the world, believing everyone else is angry, so they can be too – without guilt. Their fury is disguised as self-protection.
They see their own anger reflected in the eyes & words of their friends, mates & co-workers, without realizing it’s a mirror. This leaves everyone confused.

▪️PASSIVE-AGGRESSIVE anger
The “P-A ACoAs” posts give a full description. This category is also called:
Leaking – stockpiling resentments toward someone, & then talking about them behind their back with others who agree with us, doing things we know upset the one we’re mad at, gossiping, muttering under our breath…

Sneaky – never letting others know we’re angry, much less to what degree, but it shows up

anyway, usually by withholding – in our actions, communication, emotions…..and then acting innocent & hurt, asking with a puzzled look, “Why are you getting mad at me?”

Underhanded – indirectly trying to get revenge for injustices to our ego by sabotaging the specific ‘enemy’ we’re angry at, rather than randomly abusing whoever is near by. In this case we use little acts of ‘mild’ aggression, in what we think are socially acceptable ways – being late, making belittling side-comments, complaining to others about them, teasing, always discouraging someone’s ideas, plans, dreams….

▪️POWERLESS anger
There are very real situations in life which some of us have to deal with, where we are truly powerless – care-taking an elderly sick & forgetful parent, raising a disabled child, coping with a drug/alcohol addicted mate or older child, having a chronic illness…… It’s exhausting, wearing down our patience. It is easy to get frustrated, irritated & then angry. This is normal & needs to be addressed – by getting regular support & relief time

• However, some of us no longer live in hurtful / dangerous circumstances, yet act as if we’re still victims – as we once were in childhood. We get angry whenever we can’t get what we want or expect. We react to everyday frustrations as if they are meant specifically for us – when they’re not. We assume childhood powerlessness is a permanent state, not deserving anything else (learned helplessness). So as adults we don’t have internal permission to get our needs met legitimately. (MORE….) 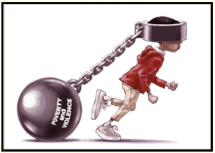 ⚡️ This causes us to only look to others outside ourselves to provide everything we need or want, & get angry when that doesn’t happen. We don’t know or refuse to admit we are responsible for our own self-care

😪 On the other hand many people are still genuinely trapped in situations they can’t get out of for various reasons – children in abusive homes, sex slaves, battered wives, prisoners, war refugees, living in poverty. (Image ↗️).  A total sense of powerlessness always generates impotent anger, even fury. But without any options, eventually depression & then hopelessness often takes over.