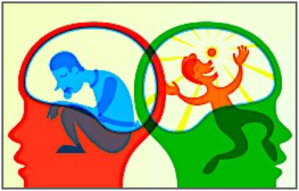 TEASING OUT Double Messages (which lead to DBs)
They’re not just very confusing, they’re devastating – as long as =
= we don’t recognize ‘craziness’ when we hear it, AND
= try to make sense of another person’s over-reaction or distortion of reality, which never has / had anything to do with us.

Without a clear understanding of logic, & still believing we’ve done something wrong – we’re kept under the Sender’s mental / emotional spell.

EXPs of anyone without power in our society
Children : threatened with punishment for telling about abuse or bullying. BUT If they don’t tell, the abuse continues.
Women can be penalized in the workplace for lack of assertiveness AND lack of femininity, with no approved middle ground.
African-Americans identifying racist words & actions are told to “watch your tone”, no matter how gently & respectfully they’re pointed out
(From “Step Away from Double Binds” by Sonia Connolly LMT)

Re. ANGER
1. If you’re consistently very angry or uncomfortable by the way someone talks to you,
they may just be mean, dismissive or unavailable.
2. But if you’re also very confused & ‘feel’ crazy, you’ve probably absorbed in the hopelessness of being put in a DB.

3. A totally different reason for being very angry at the Sender (E) comes up when you finally get what they’re really doing. This anger is not from intense frustration but rather that your ‘new’ awareness has causes a crack in some deeply held denial about them, which you we’re ready to face before.
You can tell because this emotional reaction (E) does NOT include mental confusion (T). It’s clear. it just hurts!

The IFs
👶🏼 In any case, first ask your Inner Child what it’s saying about itself. If you hear any form of self-b

lame, (“I can’t do anything right, I’m such a mess….”), the WIC is definitely agreeing with the family’s Toxic Rules.
However, if you’ve been subjected to a DB, the WIC is also twisting what it heard, using it against itself rather than hearing the twist in what the other person actually said / meant

🧔🏻 If you do catch on, then check in with your Logical Adult for a rational evaluation of what is being said. It’s absolutely OK to ask some healthy people to help you clarify & verify your conclusions
IF the Adult’s version of the DB communication is quite different from your WIC’s, and others agree that you’re NOT crazy – you can help your Child unravel the confusion & eliminate S-H

👨‍👦 IF the Adult & the Inner Child are both saying there’s something wrong with the messages you’re getting, you’re a lot closer to being free! The less internal conflict between parts of yourself (ego states) the easier it is to protect yourself.

IF you still feel emotionally confused & mentally lost, test the rules / demands / statements….for D.Messages, by first boiling them down to their underlying implications, to see where they’re contradictory, as in ‘DMs,#2’.
EXPs to get you started:
👀 “It’s a good thing that X is….”, AND “It’s a bad thing that -the same- X is….” (both must be accepted)
👀 “You should/must do/be X… to please me” AND “You should/must not do/be X… in order to please me”

EXP: Someone teases you & your feelings are hurt. If you complain, an S-type will say: “You’re too sensitive. What’s the matter, can’t you take a joke?”
But, if YOU tease someone else, those same people will say: “That was a mean, cruel, vicious thing to say. No wonder nobody likes you.”
Lose-Lose Meanings:
A – You’re bad (weak) when you don’t like my teasing, AND
B – You’re bad (mean) when you tease others
Said another way:
A – I disapprove of you when you’re over-sensitive – AND
B – I disapprove of you when you’re under-sensitive