SITE: The Uptighterati hate lateness: are we wrong?

👎🏽 Missed opportunities. Not just worst-case scenarios like missing-the-interview-for-your-dream-job. It’s the whole range of lost opportunities by not being professional

👎🏽 Damage to your reputation. A study by Jobs.ie showed that 46% of employees feel resentful toward their persistently late co-workers. And around 1/3 of managers have dismissed an employee for lateness

EXP: being late for an important meeting because of backed-up traffic (did you leave early enough?)

More people prefer messiness, loud noises, even bad smells – TO late people. In a recent study from Randstad USA, 54% of respondents said others’ poor time management skills drove them nuts, second only to office gossip (60%).
Even late people can’t stand it when others are late, in part because from their point of view, meetings start too promptly.

Friedman and Rosenman divided people into 2 personality types:
Type As are ambitious, competitive & organized. They generally have lower rates of lateness, seeing time as a valuable resource, so are more likely to manage it effectively. Asked to estimate when a minute had expired, most Type As said it lasted 58 seconds.

Type Bs are more relaxed, functioning at a slower pace. They estimated the length of a minute as 77 seconds. Over the course of a day that will have a definite impact.

Samantha Grossman (2015 – her LIST below ) writes that Comedian Mike Birbiglia quipped “What late people don’t understand about on-time people is that we hate them.”
◆ To paraphrase Tolstoy, All early people are alike, but every late person is late in his own way.

🦠 The Deny-er: The person who walks in, hugs you hello & acts like their lateness just never happened

EXP: “OMG I’m gonna be late bcuz a UNICORN was crossing the street so OBVIOUSLY I had to follow it but then my foot hurt so I had to stop and see why my foot hurt & then RYAN GOSLING walked by but it was actually a homeless person LOL so yeah I’ll be there in 45 mins maybe!”

🦠 The Empty Chair: who shows up late to an event where you’re graciously saving them a seat. Everybody gives you the stink eye, but you’re not the monster here

🦠 The Genetic Latie: who blames their personality for why they’re always late

🦠 The Hangry-Maker: who is so late that you say ‘screw it’ & start eating brunch alone

🦠 The Harried Commuter: who blames public transit or traffic every time they’re late. (Sometimes, yes. But every time? No. Build in extra time.) 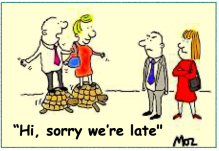 🦠 The Interruptor: who comes into the movie right as it’s starting, distracting you from the important opening scenes and/or literally crawling over you

🦠 The Infuriatingly Relaxed Colleague: who rolls into the meeting 10 minutes late, holding a coffee that they clearly could have forgone in order to be on time

🦠 The Manic Pixie Procrastinator: who shows up, breathless, their whimsical flowy skirt fluttering in their wake, thinking their lateness is adorable & bohemian

🦠 The Over-scheduler: who is late because they were doing some other fun thing right before & you know because they Instagrammed it. BUSTED.

🦠 The Over-sharer: who always blames their lateness on their significant other. This typically involves an overly detailed story you’re then forced to listen to

🦠 The Pre-Liar: who texts you “almost there!” when you’re confident they’ve in fact just gotten out of the shower

🦠 The Post-Liar: who arrives late & says “Oh my God, I’m so sorry, the subway was delayed!” when you live in a town without a subway

🦠 The Spatially Incompetent: who is always late because they just can’t seem to figure out how long it takes to get from their apartment to Point B, even though they’ve lived there for three years.