NO Differences?  : Researchers at the U of Tel-Aviv categorized brain structures into M or F zones, & one common to both – a mosaic – focusing on traits that showed the biggest gender disparity.
They noted that extremes are rare – only 6% of the subjects were more M or more F, based on analyses of several sets of data. Overall,

results show that human brains don’t usually belong to just one type or the other, even though specific parts do show gender differences. (More….)

Many recent imaging techniques, such as studies at the U of Penn, confirm that Ms & Fs are indeed “hard-wired” differently. Scientists have discovered almost 100 variances, so this reality can not be over-stated.

HEMISPHERES
While all parts interact, each has a main focus. In general:
▪︎ FRONT part of brain handles action
▪︎ BACK deals with perception (aware of something via the senses)
▪︎ RIGHT provides intuitive thinking
▪︎ LEFT provides logical thinking

Male: Typical connections are between front & back areas, mainly confined to each hemisphere separately (blue). This is why men tend get irritated when having to do several things at the same time.

Exception: The only region they showed L-R connections was in the cerebellum, which governs muscle movement, providing good motor control.
So – males are wired more for perception & co-ordinated actions, while…..

Female: ….. processes are mainly back & forth across the meridian (corpus collosum) between the L & R sides (red)
So – females are wired for social skills, memory, & being more emotionally involved.

▪︎ Because L brain is logical & R is intuitive, Fs are hardwired for

multi-tasking. Since they use both sides – when an activity requires both abilities they can more quickly transition between activities

And older Fs showed more widely distributed connections throughout the brain, rather than just in the frontal lobe.

NOTE: M & F fetuses start showing brain differences at around 26 weeks – when Fs usually start developing a thicker corpus callosum, which may explain why women tend to use both hemispheres.

Results showed Ms & Fs differ significantly in the default mode, a complex pattern suggesting that variations in their behavior might come from the activity of the resting brain. (⬇️ Images from Amen Clinic) 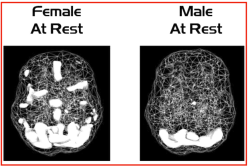 n volume, but houses over 50% of our brain’s total neurons (brain cells).

The Gurs’ studies on the resting brain found
— M activity occurred more in the amygdala, primed to react physically
— Fs’ comes from the cingulate gyrus, in the limbic emotional system, primed to react verbally

F – Although women’s brains are 10% smaller than men’s, they use their brain more efficiently. And they have higher brain volumes than men in 10 sub-cortical regions. Average weight = 2.75lbs

IMAGE from another U of Penn study, ⬆️ which shows pronounced differences between the sexes during various activities, most obvious at ages 12-14.