SITEs: “Unnaturally Good: The Plight of the Goody Two-Shoes”

✦ “How do the Roles play out in Codependency”

BOOK: Is it Love or is it Addiction? ~ Brenda Schaeffer

ROLES & Co-DEPENDENCE
Toxic Family Roles (TFR) inevitably foster co-dep. They’re a way of organizing & expressing it, taken on to make sense of & cope with the family dysfunction, (or work, church, nation), as well as enabling the addict (bully, narcissist, sadist) to continue their toxic life-style.

Sharon Wegscheider-Cruse notes that the longer people play a a false ‘part’, the more rigidly fixed they becomes in it. Eventually, family members “become addicted to their role, seeing it as essential to their survival & playing it out with the same compulsion, delusion & denial as the Dependent plays his or her role as drinker / addict”.
(Another Chance: Hope & Health for the Alcoholic Family)

Because the adult damaged & damaging person is so focused on their own activities & inner drama, they can’t be there for anyone else, for sure not emotionally & spiritually, often not mentally & physically either

This creates a great hunger in their children to do everything they can to win or earn the love & attention they’re not getting & desperately need. That compulsion turns into co-dependence, which keeps them trapped – trying to eke out a crumb of caring that’s not really available from the narcissists, AND often not even looking for others who are already capable of caring & listening.
✶✶ The saying “My loving you is none of your business!” means we can’t make someone love us & we can’t stop them from loving us!

As ADULTS
• Co-dependency can show up as occupational instability, as well as produce secondary addictive & compulsive behaviors
• the TFRs (toxic family roles) we grew up with drive every aspect of our life, showing up in all social interactions (as spouse, parent, friend, employee, student….).
Understanding 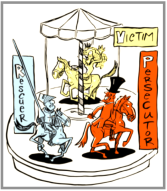 the components of each childhood role gives us all the clues needed to identify adult acing-out & makes it possible to slowly outgrow them, even if no one else in the family has made changes!

Co-dependence (Co-dep) is a family-systems syndrome developed in reaction to the stress of addiction or other “shameful family secrets”
DEF: A pathological way to live “through the expectations of others”
• An addiction to being in a supportive role in any relationship
• Keeps the co-dep** one-up (better than) & the addict one-down

** At the same time – the co-dep feels like a Victim, makes the addict into the Perpetrator & then feels resentful (Co-dep triangle).
Co-deps look strong but feel helpless, act controlling but are actually being controlled by their compulsion to PLEASE every one else

and of oneself & everyone else to believe there is no problem
• Intellectualize: use convenient excuses or explanations as a fix for severe emotional & chemical problems
• Minimize : may admit there are problems BUT make light of them
• Project: blame problems on others, & often making one child the Scapegoat

Symptoms : Avoid emotions, be controlling, care-take, denial, distrust, guilt, hyper-vigilance, intimacy problems, perfectionism, physical illness from stress.
Basic Rules:
▴ It’s not OK to feel, have problems, have fun, to be separate
▴ If anyone acts bad, irresponsible or crazy – it’s my fault
▴  I’m not good enough just as I am

System Rules close each member off from the outside world, BY: 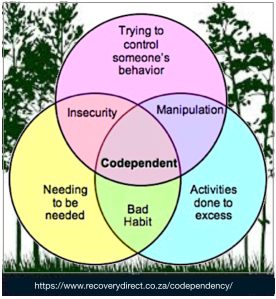 • discouraging healthy communication of issues & Es with oneself, or anyone else
• destroying the ability to trust themself or others in intimate relationships

• freezing into unnatural roles, making interaction with others stiff & limited
• teaching each family member to completely focus on someone else’s desires or problems, so they gradually lose the ability to know their own Es, wants & needs
• preventing children from growing & developing their fundamental identity, gradually ‘becoming’ the Role forced on them by the disease.