ANGER on the brain (cont. from Part 4)

✳️ Lövheim’s CUBE shows 8 emotions placed at its extreme corners in relation to the 3 mono-amines —> whether sufficient or depleted. It may help explain human emotions, psychiatric illness & the effects of psychotropic drugs.
Anger is top left, produced by the combination of low serotonin, high dopamine & high noradrenaline.

EXP: Symptoms of depression can be seen as a person who is limited to the low-serotonin side, where only the extreme emotions of : shame/ humiliation, distress/ anguish, fear/ terror & anger/ rage – are available.
Core depressive symptoms of sadness & lack of interest are then considered as the inability to reach the basic emotion & attitude of — Joy +  Interest — which are located on the high-serotonin side (MORE…)

✳️ The brain has PLASTICITY, meaning that it can be physically & chemically altered by experience – for good or ill. EXPERIMENTS:
Rats raised in a stimulating environment were smarter (had more synaptic connections) 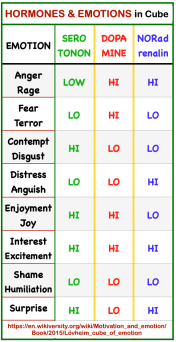 than those raised alone in bare cages, with no chance to explore or to manipulate objects.

The same can be seen in children. This plasticity means we can keep changing & growing our whole life – provided we’re always learning / trying out something new. Simply repeating what we already know stagnates the ‘computer’.

• Throughout the brain, communication between neurons is strengthened by repeated exposures, becoming hyper-responsive, making ‘grooves’ that become the path of least resistance, so that eventually less of a ‘hit’ is needed to react.
It’s why we fall back into old established patterns of thinking & behaving so easily, even when trying not to. By the same procedure , if the grooves are made of positive experiences & pleasurable emotions, we’ll feel comfortable, even happy.

• Brain-training also happens in the amygdala. Repeated painful events cause it to form a chemical map which labels the emotional importance of each person/ place/ thing (PPT) in our environment, by having ‘learned’ the level of danger that is to be associated with each one. Then drawing on stored info, the amygdala determines

how we should feel about similar situation in the future – from neutral all the way to endangered.

This becomes our default position, even when new experiences are truly not dangerous. It’s why anyone living in / exposed to prolonged trauma can develop OCD, PTSD, panic attacks, psycho-somatic illness, hypochondria….(MORE…. )

EXP: With enough bad experiences, eventually one can come to believe that : all men are scary, a raised arm always means a slap, being told to ‘wait’ always means a permanent NO, emotional intimacy in always suffocating, everyone will always screw you…. even when these things are not always true in the present.

✳️ The brain’s cortex (motor system) also contains MIRROR NEURONS, which do not seem to be correlated with specific movements, but with clear goals – whether those actions are perceived through sight, sound, or any other sensory pathway.
They fire equally when we DO something as when we OBSERVE the same action performed by another. Observing sets off these neurons exactly as if we were doing the same thing ourselves.
(Parental taunt “Monkey see, monkey do”- said to children)

They’re associated with or responsible for:
empathy, imitation & learning, which can include mentally rehearsing a set of

behaviors we’ve previously seen or heard. But these neurons only play auxiliary roles, not central ones, in action-understanding.

SO : by constantly being around an angry person – especially in childhood – we learn to copy that behavior, just by watching. But it doesn’t automatically mean we become one.
Constant exposure to ragers create mental images of angry faces & actions, so the other option is to becomes terrified of ones own anger & anyone else expressing it.
Also, when defective or dysfunctional, researchers suggest that these neurons may play a role in autism, where the person is less able to “mirror” others.
SITE: Music & Mirror Neurons