QUOTE: “If you don’t make a total commitment to whatever you’re doing, then you start looking to bail out the first time the boat starts leaking. It’s tough enough getting that boat to shore with everybody rowing, let alone when a guy stands up and starts putting his life jacket on.” Lou Holtz, football coach

i. F of S & I – To the WIC, C. to anything or anyone means that no one will ever take care of us. ACoAs are addicted to our sick family & their way of functioning in the world. Being symbiotically intertwined with parents &/or siblings, we still believe everything they implied or told us about ourselves & the world (review “S & I”, and “Toxic Family RULES”), making everything unsafe, so we might as well stay with what we know.
The WIC wants safety even more than love, and what is ‘safe’ is what it knows. In that way we are indeed committed, but not to ourselves or to mental /emotional & spiritual health. (EXPANDED in“ACoAs – Being Responsible”)

j. F of Compromise. To the WIC, C. to anything means alway 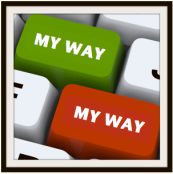 s having to giving in to others – yet again! Having had to give up so much of our identity as kids, ACoAs fiercely cling to whatever shreds of ourselves we’ve pieced together over the years – usually based on S-H, Toxic Rules, our family Role & a few genuine aspects of ourselves.
In AA those shreds are called “Self-will run riot”, (character defects) which really means our WIC is in charge – using it’s defense mechanisms to survive, but assuming they’re our real personality.

• Not having actual boundaries, we can’t bear meeting someone even part way, for fear of disappearing completely. We ‘can’t afford’ to take into account all the ways they’re different from us – their personality, idiosyncrasies or woundedness – if it means changing some of our habits or way of thinking.
It feels like loss of freedom, so the child panics, sure that ‘giving in’ would be like back home, having to negate ourselves – again.

➡️ This pattern is part of another ACoA Double Bind: Giving ourselves away completely, while being rigidly stuck in the False Self

• We’re afraid of conforming to social norms or requirement – a dress code for work, the authority of a boss, a different ‘language’ for different venues…
• We always have to be RIGHT & do things a certain way – which usually turns out to be our family’s way, not actually our own. Al-Anon asks: “Would you rather be right, or be happy?” The child’s answer is: BOTH! But compromise may mean choosing one or the other.

If you know yourself well, make 3 separate lists, of THINGS:
1. you absolutely need – can not or will not give up, change, or modify. It’s usually the shortest, making sure they really are from your True Self, using the UNIT. If it includes things about a person, job, object, locations… which truly harm &/or do not suit you – it’s imperative to eliminate them as soon as possible – not just as a ‘geographic’ escape

2. you like, prefer, even love, but are willing to work around. It means sometimes going somewhere or doing something you want, alternating with things the other person wants. It requires enough recovery to not feel resentful or diminished when you don’t get your way

3. that aren’t that important or meaningful to you, one way or another – so the other person or situation can have it their way, & it’s no skin off your nose.

💠 REALITY – if we commit to anything we do want, we’ll have to adjust ourselves somewhat to the requirements or needs of that situation or person, BUT without losing ourselves. Healthy compromise allows for both ‘parties’ to benefit. It is not co-dependence, which would exclude ourselves in favor of another.
SITE: “Compromise in an ADHD Relationship”