INFO: Somatization is one of the oldest of all known psychological 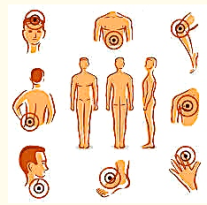 diagnoses. The first reference we know of appears about 1900 B.C. in Egyptian documents, & was also commented upon by the Greeks. In its modern form, it was first defined by Briquet in France in 1859.

√ The term Psycho-Somatic has been bastardized into meaning that the ailment is all in our head. Even when the suffering is connected to suppressed emotions, the pain in very real.
But somatizers are more likely to try medical solutions instead of the psychological treatment they really need. This route is frustratingly unsuccessful, wastes money & time, leading to more anger & depression.

▪️VOLCANIC / exploding anger
One of the more dangerous types, it’s dramatic & unpredictable, a reactive way triggered even by minor stressors that are specific to that person. It can be set off by frustration, a perceived wrong or personal annoyance (their button).

“Sudden anger” people zoom in from nowhere, blast everything in sight, & then vanish. This loss of control is a knee-jerk reaction, without the time to think or consider consequences, & therefore out of their conscious control (choice) at that moment  They say & do things they may later regret, may even apologize, but by then it’s too late to take back.
AND – they swear they’ll never go off the deep end again, but they always do.
These outburst of rage give them a surge of p

ower, used as an escape. It release all their pent-up unacceptable emotions – so they feel better – while others are left with the Spewer’s pain.
Whether it’s mostly all bluster, or more abusive, constant use of this unpredictable style can lead to emotional damage in others, that can take a long time to repair – if ever.
EXP: Attacking PPT indiscriminately, dishing out unfair punishment, irrational arguments, lashing out or inflicting harm for the sake of it, over-indulging in alcohol, drugs or other addictions….
Note: Anger management tools have proven to be particularly effective with volatile anger.

▪️’SPIRITUAL‘ anger (Biblical)
1. DIVINE – God’s indignation is a component of Divine justice – His attitude toward humans who disrespect Him & disobeying His laws. “The wrath of God is revealed from heaven against all ungodliness & unrighteousness of men, who suppress the truth.” Rom 1: 18
Characteristics :
a. Not human = never unpredictable, petty or disproportionate. It IS the just & measured response of his holiness toward evil
b. Provoked = God’s nature is LOVE and Holiness. Anger is not his nature, so must be elicited by the acting out of evil in His world.

c. Slow to be expressed = The day of God’s wrath will come, but He’s not in a hurry to bring it because then the door of Grace (unmerited favor) will then be closed.

IMP: God execution of wrath is always preceded by many opportunities for humans to repent (change). When there’s a ‘course correction’ by the offenders, God’s punishment is always withheld!

d. Revealed now = When humans suppress the truth about Him, worshiping created things rather than the Creator, God gives them up to the natural consequences of their vice & decadence

e. Stored up = There will be a final time of wrath, when God wipes out all evil. Then there will be a new heaven & a new earth, the home of eternal righteousness. (More….)   God’s anger in Old & New Testaments)

2. RIGHTEOUS HUMAN anger – our reaction against actual sin – ie. how people offend God. It focuses on God’s concerns, plans & rights
🔅 It’s not about our personal inconvenience, or violation of preference.
SIGNS: it’s self-controlled, shows concern for the wellbeing of others & seeks justice for the oppressed

3. SINFUL HUMAN anger – a reaction to our thwarted desires, being deceived or cheated.
Also, assuming God is unjust : ‘People ruin their lives by their own foolishness & then are angry at the Lord.” Prov. 19:3 (MORE…. )