I CAN FILL THE HOLE IN MY HEART
by developing a Loving, Healthy Parent

EMOTIONS: Most of our emotions are housed in the Inner Child E. S. since we start out as children, & the first way we communicate, before we can talk, and The Adult E.S. is non-emotional
🔸But the Parent E.S. definitely has feelings – anger, compassion, concern, enjoyment, frustration, healthy pride, humor, joy, love, patience, pleasure…..

PARENT E.S.: Someone with a strong (P) persona tends to focus on:

• the ‘right way’ of doing things based on the rules they believe in
• how they can have an effect on others (controlling or helpful…)
• not showing too much emotion, more self-contained
• strong importance on how things are done (specific steps)

➼ When ACoAs function too much out of our PES, we will either be judgmental & finger-pointing, OR patronizing & overly solicitous

HOW the Parent ego state (PES) is USED
a. INFLUENCING
This ego state (ES) operates internally.
IF our early caretakers were loving & reasonably healthy then our Inner Parent is a good one, & we will treat ourselves well with self-care & self-soothing (Part 6)

IF they were wounded &/or toxic, the Introject (PES) will be experienced as a weak- scared or mean-angry voice,
EITHER
👮🏽 in the form of self-criticism, causing feelings of SHAME, self-hate, self-doubt, a constant sense of being watched & controlled, not knowing what we want think or feel, generating chronic anxiety and depression…. 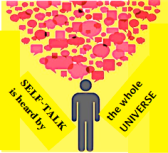 OR
👨🏽‍🏭 as outside criticism, by hearing warnings, judgements, demands, needs, rules…. from others, which creates fear & a degree of paranoia in us.
Whether these come from real people or from ‘mis-hearing’ what’s said to us, we usually don’t realize we’re projecting our own PP outward.
They mens that:
— staying with people who are actually unavailable, selfish, mean, crazy… we’re participating in a relationship that’s an external version of our PP, a copy of our original abandoners / abusers
— OR when have strong painful / angry feelings toward people who are just being ‘normal’ humans but happen to push our unhealed buttons – we’re making them into the PP we carry in our head

b. ACTIVE
This operates externally – being the Bad Parent toward others, hiding the WIC behind a defensive wal.In this mode we function in the outside world exactly the way our family treated us, reproducing the emotions, attitudes & behavior of our original significant-others.

As above, this will depend on how we were treated as kids. Since most people are wounded, the ‘acted out’ (projected) bad voice will be coming from the Negative PES. The psychological function of treating others badly is to diminish the pressure & anxiety created by our Toxic Introject & the WIC. Letting it out on others is a relief from the ‘influencing’ voice that is badgering us all the time.

EXP: When a mother screams at & criticizes her children (as the Negative Parent) the same way her father screamed at and criticized her when she was young (her PP) – she gets momentary relief of that pain by externalizing the abuse she received from him & still holds in her being, but is probably not aware she’s reacting from her Bad Parent ego state.

REViEW  : Distorted or Missing Parent states (‘Contamination’)
⬅️ Type 1 – damaged Parent – we treat others the way we were treated as kids, & the Healthy Child ES is suppressed

CUT OFF Aspects ➡️
🗯 When Parent contaminates Adult & C. is unavailable, the person is stiff, humorless, always ‘correct’
🗯 When Parent is unavailable & C bleeds into A, the person has no regard for others, & is only interested in self-gratification
🗯 When Adult is missing, the Pig Parent & WIC are in constant conflict, potentially leading to mental illness